Here are the frogs  and Toads that can be found in New Jersey:

The American toad is mainly nocturnal and is most active when the weather is warm and humid. During the winter, the toad will burrow deep into the ground below the frost line.  As the frost line gets deeper, the toads will burrow deeper beneath the ground. They can be found in all of the northern region except for Monmouth County within New Jersey.

The Fowler’s toad is usually brown, grey, olive green and rust red in color with darkened warty spots.  As these toads become adults, a pale stripe will form down its back.  The belly is usually whiteish with one dark spot.  These toads are abundant throughout southern New Jersey and rare to see in northern New Jersey due to the American Toad’s presence.

The grey treefrog may range in color from green to brown to grey (as shown above).  During the day, they may be found sleeping on tree branches or leaves.  Their toes have a sticky pad which allows them to easily climb vertically up windows, siding, trees; etc.  They may be found throughout the state except for the core Pinelands.

The  spring peeper is one of Vermont’s smallest frogs measuring from 1″ to 1-1/2″.  It can be distinguished by it’s dark colored “X”across its back.  This frog is very common throughout the state of New Jersey.  They can be found in a variety of habitats and breed in almost any freshwater source.

This subspecies of a chorus frog is 3/4″ – 1 1/2″ in size.  The New Jersey Chorus Frog can be found in swamps, moist woodlands, and the areas surrounding marshes, bogs and ponds.  It is quite common within the southern portion of New Jersey but is not common within the core Pinelands.

The American Bullfrog is the largest frog in North America.  They are typically green or gray-brown with brown spots. They can grow up to 8″ in length and weigh up to 1.5 pounds.  The bullfrog can be found near large permanent bodies of water with vegetation near the shorelines.  They are common throughout New Jersey, but are absent from the acidic waters of the core Pinelands.

It has a very deep call which resembles the mooing of a cow.  Watch the video below to hear!  Both genders of the bullfrog croak.  Their calls may be heard day or night between April and July.

The Green Frog is abundant throughout New Jersey and can be found in almost every town.  It is typically greenish-brown with dark mottling on its head, chest and under its legs.  The throat color ranges to yellow for a male to white for the females.

The Wood frog is known as a brown, tan or rust colored frog with a dark colored around its eyes.  Some call it a “robbers mask”.  These frogs are found statewide, but they are rare within the core Pinelands.

The southern leopard frog is a greenish brown color and has 2 yellow lines down the back and one above the lip.  These frogs can be found in shallow freshwater or slightly brackish water.  They are usually found a powerful jump or two away from the water, however in summer they may be found far from the water where they venture for insects.  They can be found throughout the entire state of New Jersey, however they are rare within the northern region.

The Pickerel frog looks very similar to the Leopard frog; however the pickerel frog has 2 parallel rows of squareish spots down its back.  These frogs are very common throughout New Jersey except for the core Pinelands.  They are often found near beaver ponds with dense vegetation.

The Eastern Spadefoot has smoother and more moist skin than most toads and is speckled with very tiny warts.  This species varies in color from tan or yellowish to dark brown without bold spots like other southern toads.  They usually have 2 vertical light lines running from the back of their eyes down their dorsum creating a hourglass shape.  The lines are usually more visable in males.  The Eastern Spadefoot toad is found throughout the state of New Jersey. 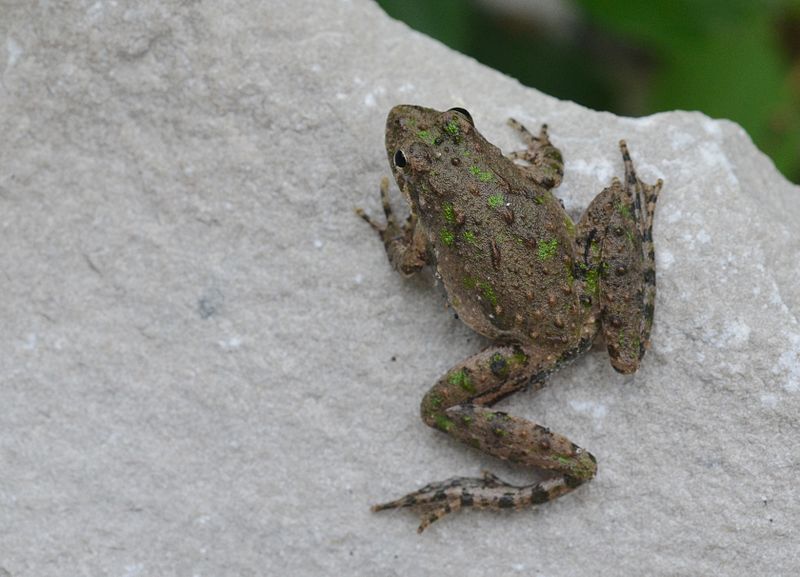 The Eastern Cricket frog measures an average of 1″ in length with the females being slightly larger.  These frogs can jump a surprisingly long way (5-6′) for their small size.  They can range a combination of black, yellow orange or red on a base of brown or green.  This frog is found throughout the entire state of New Jersey, except for the core Pinelands.  They may be found near permanent water sources like slow moving streams, margins of lakes and ponds or around marshy areas.

The green treefrog is slender frog that ranges from bright green to dull green with a white stripe down its side.  These frogs can reach 2.5″ and can be easily frightened.  They are typically found within marshes, swamps, small ponds and streams, but can also be found within brackish water sources.  They can be found across the entire state of New Jersey, except for the core Pinelands.

On average, a female will lay 400 eggs.  The male’s call is a single note repeated over and over sounding like a “queenk”.  Listen to their call below.  Breeding takes place May through July.  It has been noted that the green treefrog will choose its prey not based on size, but based on activity level.  With the most active being eaten first.

The Carpenter frog is widely known for its dark brown color with (2) light yellow stripes on either side.  This frog can be found within all of southern region except northern Salem, western Camden, Gloucester counties and the cape may pennisula as well as in southeastern Manmouth County.

They can be heard in April with a call that sounds like construction workers hammering, hence their name.  Listen to their call below.  Tadpoles are unique as they will remain a tadpole for around a year.  The carpenter frog thrives in acidic water and as the wetlands water becomes less acidic, other larger frogs are now taking over their habitats. 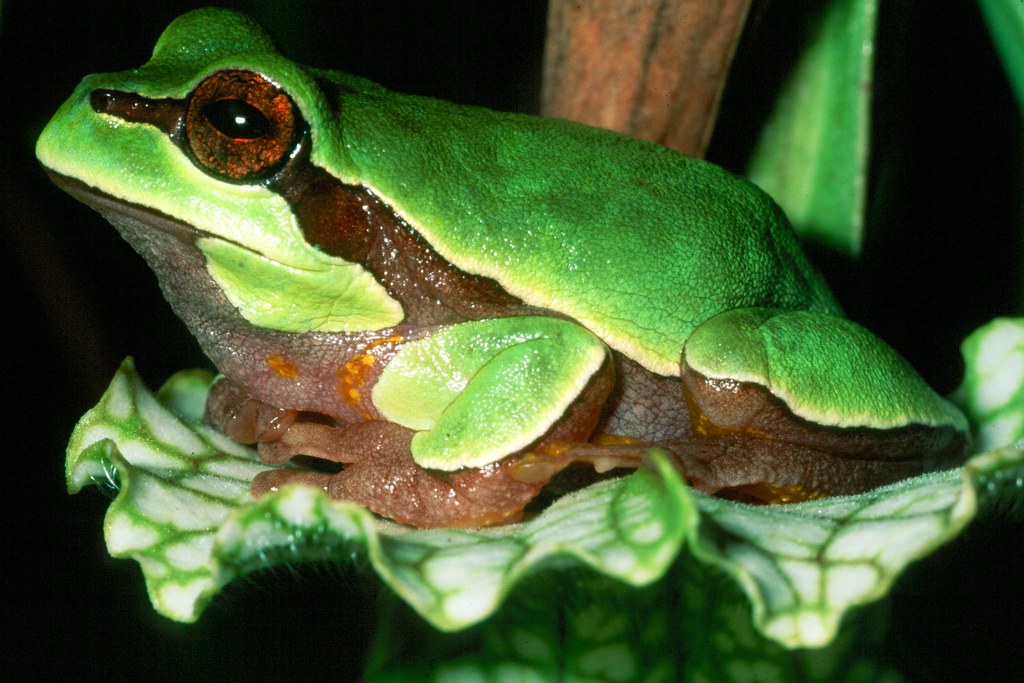 This treefrog is bright green in color with lavender stripes and orange portions concealed on legs.  The Pine Barrens treefrog can be found in the mid eastern portion of the state and appears to be limited to the acidic waters of the New Jersey Pine Barrens.  Although the pine barrens have a limited distribution throughout New Jersey, they can be locally abundant within their range.  This frog is listed as endangered within new Jersey.

The Pine Barrens treefrog prefers shallow pools and temporary streams.  This species can be found by the breeding calls in May-July.  Their call sounds like a repetitive honking noise.  Listen to the call below.  After breeding, they return to a more terrestrial habitat.